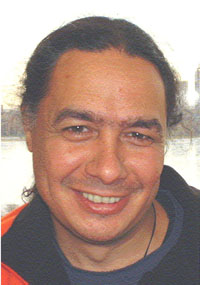 David Bell grew up on the banks of the Diep River Estuary, near Cape Town. Regular forays into the mountains of the Western Cape and the deserts of Namaqualand forged a life-long interest in the diversity and inter-connected workings of Nature. He majored in Chemistry, Zoology and Geology at the University of Cape Town, completing his B.Sc. (Hons) in Geology in 1981. After military service and two years of valuable experience in the diamond exploration industry, he migrated to the USA for postgraduate study. Performing spectroscopic and high pressure experimental studies of hydrogen in mantle minerals under Professor George Rossman, he earned a Ph.D. in Geochemistry from the California Institute of Technology in 1993. After four years of postdoctoral research at the Carnegie Institute of Washington Geophysical Laboratory, he joined the Kimberlite Research Group at UCT as a research fellow, where he managed the research and academic affairs of the group, teaching and supervising honours and postgraduate students. In 2001 he returned to the USA as the Crosby visiting scholar in the Department of Earth, Atmospheric and Planetary Sciences at the Massachusetts Institute of Technology, and is currently Associate Research Scientist at Arizona State University in Tempe. His research is built around detailed observations on the minerals and rocks of the continental upper mantle, and on the kimberlites that transport these samples from Earth’s deep interior to the surface. By studying the petrographic, mineralogical, elemental and isotopic compositions of these rocks and relating them to both atomistic material properties and to geophysical and geological studies of the lithosphere, his goals are to piece together the geologic history of lithospheric mantle, and to decipher the record contained therein of evolving global geochemical cycles. In addition to studies of mantle processes (e.g., the origin of diamonds), his investigations into the behaviour of H and C on the Earth through time include studying the concentration and isotopic composition of volatiles in volcanic rocks, global reservoirs and extraterrestrial systems.