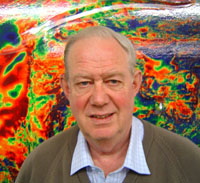 Andrew Duncan is a graduate of the University of Cape Town who obtained his PhD from Victoria University of Wellington in New Zealand and then spent 2½ years as a postdoctoral research fellow at the Center for Volcanology in the University of Oregon (USA). He started a ten year period as a NASA co-investigator on the Lunar Science Program during his time in Oregon and continued this when he returned to UCT in 1972. His research focus for much of his career has been on volcanic rocks with particular interest in the geological, volcanological, geochemical and petrogenetic aspects of the Karoo and Etendeka flood volcanic provinces in Southern Africa. In pursuing his interest in the geochemistry of volcanic rocks he became a practitioner in the application of a number of analytical techniques, particularly X-Ray Fluorescence Spectrometry (XRF), in obtaining high precision trace element analyses. As a spin-off from this engagement with sophisticated XRF techniques he has presented a continuously evolving course on the “Theory and Practice of Modern XRF Spectrometry”, in partnership with Professor James Willis, for the past 30 years in Cape Town and in Canada for the past 14 years He has developed computerised techniques for obtaining instrumental analytical data, for establishing geochemical correlation techniques between volcanic rock units using multivariate statistics, and for the simulation modelling of igneous petrogenetic processes. For the past 9 years he has been the project manager for several major high-profile and high-budget projects at UCT, including a current project to implement a major renewal of the Information and Communication Technology (ICT) infrastructure and ICT services at UCT. He is currently the Project Manager in the Office of the Vice-Chancellor at UCT, but now also returns to his roots as an Earth Scientist bringing with him analytical and ICT experience, together with his project management skills, to apply to the role of AEON’s Interim Chief Executive Officer.