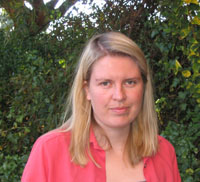 Zenobia Jacobs is a South African who graduated from the University of Stellenbosch and has a PhD from the University of Wales, Aberystwyth. Her PhD involved the development of luminescence based dating techniques for dating Middle Stone Age (MSA) archaeological sites in South Africa. Her research currently focuses on further technique development to increase the precision and accuracy with which optically stimulated luminescence (OSL) dating can be applied to a range of sedimentary types, focussing in particular on the development of single quartz grain techniques. Her main interest is in using OSL dating as a means to investigate the when and where of anatomical and behavioural origins of modern humans (Homo sapiens) and the palaeoenvironmental context in which this origins and evolution occurred. She has recently moved to Australia to take up a position at the University of Wollongong. In AEON she will continue her current research but will also use OSL dating to investigate landscape evolution and reconstruct palaeoenvironments during the Pleistocene and Holocene.