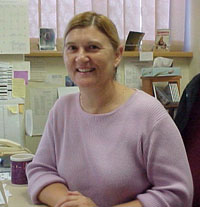 Judith Masters received her BSc (Biological Sciences) from the University of Natal in 1976, and her PhD from the University of the Witwatersrand. She pursued post-doctoral studies at Harvard University under Professor Richard Lewontin (1987-9) and has taught at the University of the Witwatersrand (1989-91), State University of New York at Stony Brook (1994-5), the University of Fort Hare (1996-8) and the University of KwaZulu-Natal (1998-present). Judith is an evolutionary biologist with a primary interest in species concepts and speciation biology, two major areas of specialisation which she is now integrating in order to understand the main causes behind changes in African mammal diversity. Her present research is focused on the link between the process of natural selection (chiefly in the form of habitat deterioration, but also due to predation pressures and intergroup competition) and the origination and extinction of species. The link between negative selection and extinction is relatively straight forward, but can the same suite of processes account for the origination of evolutionary novelties? If, as many evolutionary theorists claim, speciation occurs more rapidly and more extensively in the absence of selective agents, to what extent can it be seen to be responsible for the Origin of Species? To this end, Judith investigates the role of environmental change in the emergence of new species using her other area of specialisation, the strepsirrhine primates. These include the lemurs of Madagascar (approximately 60 Recent species), the galagos or bushbabies of Africa (approximately 15 species) and the lorises of Africa and South-east Asia (approximately 7 species). The work involves characterising this diversity as accurately as possible, and comparing the boundaries of the distributions of these biodiversity units with major features of the African and Malagasy landscapes: e.g., climate, topography, vegetation, soils. A reconstruction of the phylogenetic histories of these groups allows us to reconstruct the common ancestors of the living taxa, and to estimate the environmental conditions that may have driven these divergence events. These estimates can then be compared with the palaeoclimatic record of Africa. Once the relationship between the extant biodiversity and the habitats of Africa and Madagascar are clarified, these data can be used to predict the future survival prospects of these species, as well as other taxa that are dependent on the forests and woodlands of Africa and Madagascar. Judith uses Satellite images and historical maps to document changes to Africa’s and Madagascar’s vegetation over the past 50 years. Along with reconstructions of vegetational changes this work is to be linked to projected climatic fluctuations, to forecast which populations (and which habitats) are under the most immediate threat of extinction, and where the most immediate conservation efforts should be directed. Judith Masters was assistant Director of the Natal Museum in Pietermaritzburg and has now taken up a professorship and the headship of the Department of Zoology at the University of Fort Hare.